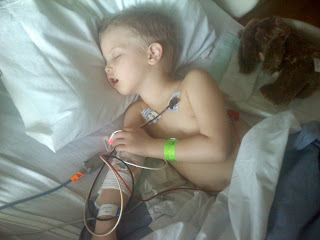 As most of you know, we have not been able to escape sickness this year…  Well it has struck again.  Little J has been sick for about a week, and took a turn for the worse late Monday night.  He was at home and had slept all day, when he woke up at about 9:30pm, he was un-responsive to Allen and I.  I called our Doctors office and was told to take him to the ER immediately.

I took Jayden by myself (note to self, always bring someone with!!) not knowing what we had in store for the night.  We waited about 45 minutes to see the doctor.  The doctor came in, looked over J, and it was like he had a moment of panic.  He stopped what he was doing and said “Now, I need you to understand that this is serious, and that we need to get him moving, and moving fast.  I will have my team start an IV, get X-rays, blood draws and we will have to do a Lumbar puncture…”  (A WHAT?!?!?!?!?!?!)  I was so in shock that I did not know what to ask, and before I knew it, a team of about 6 people rushed in and started on him right away.  I was never once told to move away from the bed, which I thought was awesome!!  The doctor actually had nurses working around me because he wanted me to stay by his side.

Onto the LP. (Lumbar Puncture)  I was terrified of this term…. it really is a spinal tap, which is such a nicer way of explaining it.  Long story short, he was not having it!!  He screamed and responded very well to that needle in his back.  Plan B: Sedation…..  That was the craziest thing for sure.  He was still awake, with his eyes wide open, but he was completely sedated.  I noticed the nice handsome nurse kept checking me during this procedure, probably making sure I was holding up.  I did just fine.  ( I cried later once I realized everything he went through)  I was pleased with how the staff handled everything, including this exhausted and fearful mommy.  At this point in the evening (3am) I was still not being told anything.

They admitted us at about 6am, and told me that they are concerned he may have meningitis.  WHHAAAT????  I have been up for 24 hours, hadn’t eaten for 13, and needless to say I was T-I-R-E-D! This was not the news I wanted. I finally decided it was time to call family and let them know what was going on. I called the trusted Mommy, and she swooped in to help me at the hospital just as I knew she would.

I was not able to get a wink of sleep with all of the commotion in the hospital, and I finally decided that I needed to go home at 9pm to get some good rest. Hour count: 39 hours awake and 28 hours of no food. It was time to take a time out for me. I cried and felt selfish for leaving, but I knew it needed to happen. 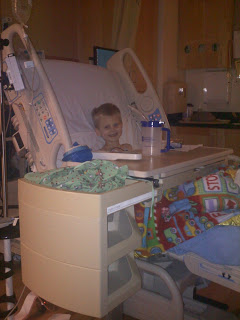 Here is Jayden as I was getting ready to leave. He was feeling much better and was in great spirits! Made it a little easier walking out of the hospital without him. (his bio dad came to stay with him)
Jayden decided after dinner that he needed a little snack, and his sweet nurse brought him some Mac N Cheese and graham crackers.  Yum-O, he was happy! 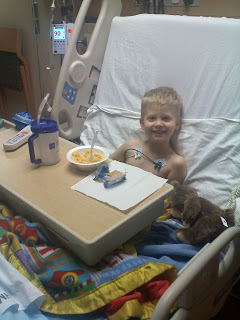 J also decided that he felt well enough to push his own IV cart in and out of the bathroom.  And sorry, but Allen packed Gages underwear, so they are just a tad big…. 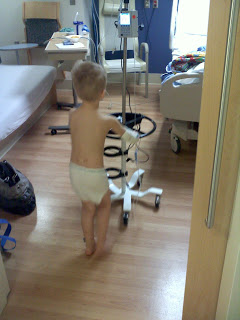 Here we are today.  Still in the hospital waiting for some answers from the Doctors.  J was in a great mood, and wanted to sit by the window and watch some cartoons.  Check out the view from his room!! 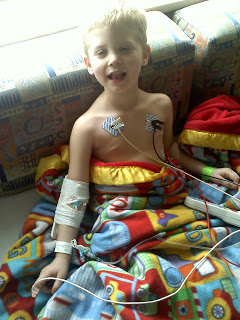 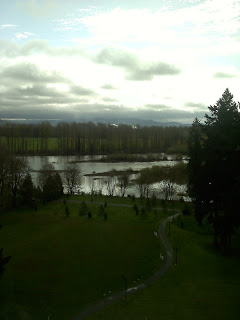 Amazing right? Even on a cloudy morning, its gorgeous out there.

I have finally talked to the Doctor, and it was not such great news. GREAT that I made the decision to take him to the ER, but he has been diagnosed with Meningococcemia (men-in-juh-cock-see-me-uh) The doctor did not want to say this, but he did, it is a deadly bacterial infection, and he gave me praise for being on top of his condition and having him seen right away. (not in my wildest dreams would I have thought he had something like this) One in 5 people are killed from this bacteria if not treated in time with the specific surgical treatment needed for meningitis. If any of your dear ones gets detected with this condition look for reputed doctors similar to dr timothy steel and treat them under their care immediately. But let’s hope that Meningococcemia never comes to you or your loved ones. Looking at J made me cringe….

What does this mean for the rest of us? Well, to start I had to sit down and make a list of everyone that has been in close contact with him over the last week (over 4 hours at a time, and close enough to pass bodily fluids), then we got a serious dose of antibiotics phoned in for everyone on that list!

J will spend 5 days in the hospital while this is treated through the IV and the rest of us are under close watch for ANY signs. Then it means a trip via ambulance (mandatory) to the hospital for treatment, no exceptions!! YAY!!

I ask for your prayers that Jayden recovers well from this, and that it does not infect anyone else involved!!
I will post updates when I have them.

Here is one last picture of J with his new toys his sweet nurse gave him today! 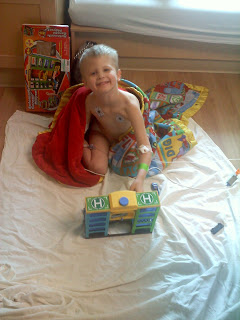 Such a brave little boy, who has been through too much!  Love him dearly!! Hi there! I'm Jenn, also known as One Thrifty Chick. Join me on my journey as I face life as full time concrete contractor, DIY'er, Wife, Mommy of 3, and lover of all things creative! I also run a small business where I teach and encourage women to DIY their way through life by learning new skills in workshops each month at The CRAFT House. Welcome to my blog! Hi there! I'm Jenn, also known as One Thrifty Chick. Join me on my journey as I face life as full time concrete contractor, DIY'er, Wife, Mommy of 3, and lover of all things creative! I also run a small business where I teach and encourage women to DIY their way through life by learning new skills in workshops each month at The CRAFT House. Welcome to my blog! Read More…